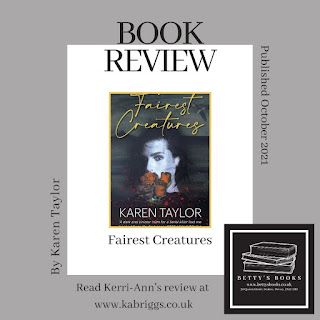 FAIREST CREATURES By Karen Taylor
Thank you to the author and to 'Random Things Tours' for sending me a proof copy to read and review. I'm sharing my review today as part of the book tour.

Blurb
A serial killer’s dark obsession with the preservation of beauty sees him return to stalk the streets of Penzance in the summer of 2019. It’s 23 years since his first victims went missing, setting DI Brandon Hammett on the hunt for the Sleeping Beauty Killer. A beautiful woman is being held captive in an unknown location. Although not physically injured, she is manacled to a chair in a darkened, sinister dining room. Her captor is polite but menacing. Her female companions, silent spectators. When a glass box is found in Prussia Cove, containing a conch and the ear of a missing beauty, a murder investigation is launched. Is the Sleeping Beauty Killer back? Or is this a copycat killing? What’s clear is an evasive, clever killer is at large, presenting DI Brandon Hammett with his biggest challenge to-date.

After reading the blurb for this one I had a good feeling, crime fiction is something I read a lot of and usually enjoy. I will say though that I don't feel like the cover quite suits the story, as beautiful as it is, as a bookseller I know how important covers are (though we like to say 'don't judge a book by it's cover, so many shoppers do!) I feel like some of the potential male audience will look past the book due to its cover not realising that the story within would actually appeal to them.

The chapters in this book are dated, not named or numbered and they switch perspective giving the name of the character in which the chapter will be focused around. e.g.

I found it an interesting way to break up the story, it worked pretty well the chopping and changing of the character at the forefront, at times giving you a glimpse into the mind of a dangerous and disturbing killer and at others following the DI who races against time. The chapters are mostly short and snappy with some longer and more in depth the variation worked well. It does mean though that the book will suit readers who either have a good memory and can remember where they left the book or who can read it in longer chunks to keep on track.

I wouldn't say it is fast paced initially, but it isn't slow either it tracks along at a comfortable speed. I enjoyed the plot and I was drawn in and hooked early which is always a good thing. As you get towards the closing chapters the speed certainty picks up and there is absolutely no chance you'll want to put the book down. I will admit reading into the early hours because I just had to find out how it would end.

The twists and turns are brilliant, keeping you on your toes. I really enjoyed the ending too, very clever way to wrap things up. I did guess a few of the twists but that is only because I read & watch so much crime / thriller.

I absolutely loved this book and will recommend to fellow crime, thriller, murder & mystery fans.

You can purchase this book here

Thanks again to the author and to 'Random Things Tours' for sending me this proof copy. 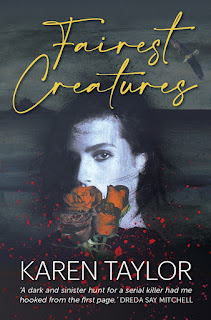 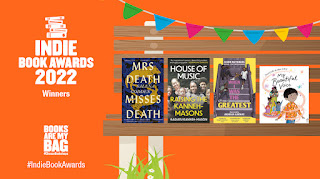 Congratulations to the Indie Book Award Winners 2022!  Fiction Mrs Death Misses Death by Salena Godden Mrs Death tells her intoxicating story in this life-affirming fire-starter of a novel. Mrs Death has had enough. She is exhausted by her job and now seeks someone to unburden her conscience to. She meets Wolf, a troubled young writer, who - enthralled by her stories - begins to write Mrs Death's memoirs. Non-Fiction House of Music - Raising the Kanneh-Masons by Kadiatu Kanneh-Mason  A beautiful and heartrending memoir of the power of determination, camaraderie and a lot of hard work. Children’s Fiction When I Was the Greatest by Jason Reynolds, illustrated by Akhran Girmay  A coming-of-age novel about friendship and loyalty across neighbourhood lines - illustrated by award-winner, Akhran Girmay. Picture Book My Beautiful Voice by Joseph Coelho & Allison Colpoys  A moving, lyrical picture book about a shy child unlocking the power of their own voice throu 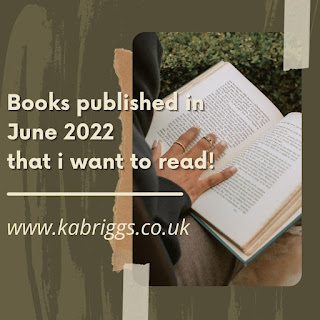 Books being released in June 2022 that I want to read

As a bookshop owner and book lover I often find myself spending far too much time researching new books due for release or that have just been released and making lists of books that I want to read rather than actually reading all the books I have in my TBR pile. It is one of my many faults, one I doubt I'll ever be able to fix.  Here are a few of the books I've come across that are being published this month, June 2022, that I want to get my hands on and read.  The Truth About Lisa Jewell by  Will Brooker   Published: 9th June 2022  the description reads:  *For those aspiring authors who are interested in the path to success* 'I read this yesterday in one glorious sitting! What an absolute treat of a book!' Lesley Kara'This is definitely going to be one of the big 'how to write' books - every author who is on a quest to be Lisa Jewell will love it. Illuminating, revealing and absolutely fascinating, Will Brooker offers us the keys to the Jewell kingdom.'