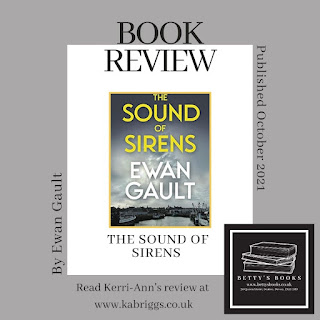 This review is part of the LOVE BOOKS TOURS book tour. Thank you to them and to the author Ewan Gault for sending me a gifted proof copy.

In a dead-beat coastal town in North East Scotland, seventeen-year-old Malky Campbell is desperate to help his pregnant and heroin addicted girlfriend. DI Stark, a middle-aged detective, alarmed by the rise of teenage and gang crime in Port Cawdor, uncovers the operations of a county line gang that are flooding the area with drugs and engaging in a vicious turf war with the local crime family. Malky has just started working on his family's trawler with his cousin Johnny, when their boat pulls up Johnny's brother in its nets.The rest of the crew, the tightly-knit community and the police start to suspect that the cousins are responsible for his death. With his brother dead, Johnny inherits the family trawler, which he had planned to use to smuggle drugs into the country for the county line gang, giving him enough money to start a new life. Ewan Gault's debut, The Sound of Sirens is a tough, modern crime novel, presenting the complexities of young life in a town at the end of the line.

The first few pages didn't grab me with this one but I pushed on and as I did I was drawn into the story. The story covers some dark topics including death, violence and drug addiction. I did feel sorry for one of the main characters Malky, he initially seemed torn between following with the crowd in his dead beat coastal home-town and escaping to create a new better life. Family pressures and situations that arrived seemed to force him to stay. The author did really well in presenting the struggles that the community in the town, especially the youth faced.

I found the language used hard to connect with, I know it was used to emphasis the characters and the town / country they are from but as a reader with no real knowledge of the dialect I did struggle at times to know what on earth they were talking about. There were times that I wondered if there were simply spelling and grammar errors or if it was supposed to be part of the dialect, in fact I'm still not sure on some parts but I was reading a proof copy so it could well have been simple errors. This is just a personal pet peeve though and I'm sure others won't be as put off as I was.

The perspective jumped from 1st person to 3rd person (viewing from the point of view of the police) through the chapters, usually I don't mind this but for some reason it niggled at me with this one. I much preferred reading the chapters in 3rd person, those were the chapters I seemed to enjoy more.

The story line itself was interesting and progressed well, I think the reason I struggled a little to get into it and enjoy it was just the language. Once I got used to it I was able to enjoy the book and actually it was well wroth it. I'd be happy to recommend this book to fellow crime fiction fans.

On another note, it really got me thinking about the way some are forced to live. The author did really well here in creating not only a great fictional novel but getting us to stop and think.

3.5 stars
(I was torn between 4 & 3.5 here, I only went lower to be honest about my personal enjoyment with regards to the dialect. 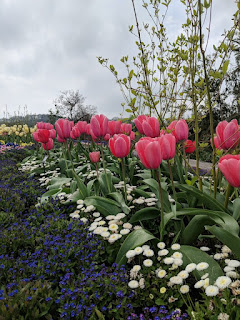 Aligning aesthetics and environmentalism: A consideration of aesthetic care for natural landscapes

Below you will find my Philosophy Masters final dissertation with which I passed my MA. I have posted it for information purposes only and all opinions and research is my own, sources and references are listed in the bibliography. Please do not copy or use any of this writing. Comments and questions are welcome, if you are currently studying for a degree or MA in Philosophy or are simply interested in this particular topic please feel free to get in touch.  Copyright: Kerri-Ann Betty  Aligning aesthetics and environmentalism: A consideration of aesthetic care for natural landscapes. by Kerri-Ann Betty (was Briggs)  Abstract I’ve always felt drawn to nature and natural landscapes. I love to take walks and admire the formations of land, the flora and fauna created by nature. John Burroughs wrote in ‘The art of seeing things’ “If I were to name the three most precious resources of life, I should say books, friends, and nature; and the greatest of these at least the most constant and 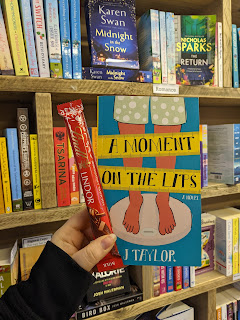 A moment on the lips by J.Taylor | Blog Tour Post

A big thank you to the author and to Random Things Tours for sending me this proof copy to read and review Description By losing weight they gained each other. From debut author J Taylor comes a hilarious, heartfelt story about friendship, self-acceptance and discovering how on earth one goes about losing an awful lot of weight... Etta Wilson has vowed to make a change. At five foot three and a size twenty, she’s had enough. Honestly, this has absolutely nothing to do with seeing her ex, Robert Ward, strolling around town, smitten with a new slim girlfriend. So, Etta’s chucked the calorific cakes, thrown the takeaway in the bin and committed to cardio. She’s got nothing to lose - well apart from a lot of weight - but how hard can that be? Nearly impossible, it turns out. Etta soon realises she can’t do this alone. Thanks to her colleagues at the Elm Lodge Care Home, she won't have to. With their help, will Etta reach her goals? Or does a moment on the lips really mean a lif 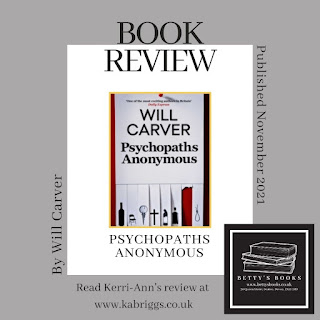 *WARNING: This book contains sex, violence and swearing*  Description  When AA meetings make her want to drink more, alcoholic murderess Maeve sets up a group for psychopaths ... The dark, unpredictable, electrifyingly original new thriller from critically acclaimed author Will Carver. 'Cements Carver as one of the most exciting authors in Britain. After this, he'll have his own cult following' Daily Express 'Will Carver is an exhilarating and audacious new voice in literary crime fiction' Sarah Pinborough 'A new Will Carver novel is always something to look forward to, and this is no exception. Striking and unusual, and dark as ever' S J Watson -------------------------------------------- Maeve has everything. A high-powered job, a beautiful home, a string of uncomplicated one-night encounters. She's also an addict: A functioning alcoholic with a dependence on sex and an insatiable appetite for killing men. When she can't find a support group to s